Prostitution has often been called the “world’s oldest profession.” But it’s a little known fact that the world’s second oldest profession – lawyers – got started soon after the first prostitute was arrested. 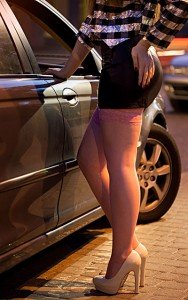 In California, prostitution is a misdemeanor, and a relatively minor one at that (except for repeat offenders, who can receive much tougher penalties). But just the same, law enforcement agencies invest considerable resources in targeting both sex workers and their would-be customers.

The crime of prostitution involves trading sexual acts for money or other compensation. As specified by California Penal Code 647(b), participating in acts of prostitution — as well as simply offering or agreeing to engage in a sexual act for pay — can result in the arrest of:

Other sections of the penal code are also applicable, particularly to anyone acting as an agent to facilitate prostitution: PC 266h and 266i for “pimping and pandering,” as well as PC 653.23 for “supervising or aiding” a prostitute.

Of particular importance is that to be arrested, tried, and convicted of prostitution, the alleged prostitute need not be a professional or earn a substantial percentage of their total income from prostitution. Any offer or agreement between two people involving sex in exchange for compensation is considered prostitution under the law. So, even an arrangement to help pay the rent, barter for car repairs, or in exchange for a place to stay can constitute an act of prostitution.

Elements of the crime of prostitution

To obtain a conviction for a charge under 647(b) PC, the prosecution must prove that the defendant willfully participated in intercourse or other sexual services and received something of value – money and/or goods and/or services — in exchange.

Otherwise, if the sexual act did not actually occur, and the defendant is charged with offering, requesting, or agreeing to an act of prostitution – in essence, “attempted prostitution” —  the prosecution must prove that:

Despite some evidence that public opinion is beginning to shift in favor of decriminalizing paid sexual acts which occur between two consenting adults in preference for allocating more resources to preventing and punishing human trafficking, prostitution continues to be viewed and prosecuted as a crime by law enforcement and justice system officials. As such, many law enforcement agencies expend considerable resources on vice operations targeting prostitution.

The majority of arrests for prostitution occur prior to an actual sexual act. Most commonly, either the customer or prostitute is an undercover police officer participating in a “sting” operation. These operations are periodically conducted in areas known to be frequented by prostitutes, such as certain streets, neighborhoods, or businesses. Undercover officers working sting operations usually wear,  or are located within the range of audio or video recording devices so the entire incident can be captured for evidence.

A law enforcement officer is permitted to convincingly portray a prostitute in appearance, dress, and mannerisms. They may also provide false assurances that they are not a cop. Generally, they can even openly offer to commit a sexual act for money without violating California’s entrapment provisions.

The other common type of arrest for “attempted prostitution” occurs when a would-be client is observed by police picking up a suspected prostitute on the street or in some other setting. In these situations – unlike the sting operation – evidence of the offense must usually be provided by an admission of guilt. The alleged prostitute and john will typically be interviewed separately by law enforcement officers, and various techniques utilized to entice a confession out of one or both of the suspects. For more information, read Don’t Talk to The Police and Miranda rights: what happens during an arrest?

Prostitution and the Internet

As sex workers and their clients – who often refer to themselves as “hobbyists” — have increasingly moved to the Internet, law enforcement has followed. At any given time, some percentage of advertisements appearing on web sites such as backpage.com, cityvibe.com, and adultsearch.com have been posted there by law enforcement agencies.

In the grass roots tradition of the Internet, numerous innovative solutions have been developed by enterprising individuals to decrease the risk to potential clients and available sex workers looking to engage in intimate commerce (i-commerce?). Sex worker message boards, escort review sites, and even third-party client verification services are widely available online.

PC 647(b) is a misdemeanor offense. Criminal penalties for a first conviction may include any or all of the following:

Legal defenses to a charge of prostitution

In California, merely presenting a target with an opportunity to participate in an unlawful act does not constitute entrapment. Rather, entrapment occurs when law enforcement officers (or their agents) persuade, convince, or coerce the accused into an illegal act.

As noted above, police officers are permitted to initiate contact with a potential “john,” convincingly portray a prostitute in their appearance and demeanor, and even offer to perform sex for money. Undercover law enforcement officers are often younger and more attractive than actual prostitutes, giving them a competitive edge in getting the attention of would-be johns.

This defense requires the defendant to prove the police officer(s) are guilty of entrapment. The standard of proof is “by a preponderance of the evidence,” or in plain language, ‘more likely than not’ — rather than the more rigorous standard of “beyond a reasonable doubt” by which the defendant is judged.

If a clear audio or video recording that contains actions or verbal agreements which are compelling evidence of guilt does not exist, it is more difficult for the prosecution to obtain a conviction. It may be possible for the defense to cast enough doubt upon the testimony of law enforcement or other eyewitnesses to secure a ‘not guilty’ verdict.

Even when there is a clear recording, if it is not explicit regarding an agreed-upon sum of money or other specific compensation to be exchanged for sexual activity, it may be inadequate evidence to support a conviction.

In some cases, there may be only circumstantial evidence — for example, money and/or condoms found on the suspect(s). This type of evidence can be challenged, and is often too weak on its own to secure a conviction.

Not a sexual act

For the purposes of 647(b) PC, a sexual act means intercourse, or any other act which involves contact with the genitals or buttocks (or for females, the breast) of another person for sexual arousal or gratification. If the defense can show that the act which was solicited or performed does not meet this definition, prostitution did not occur.

For example, if a man attempted to hire a woman to perform nude modeling or give him a massage, there may not be a violation of 647(b) PC.

For a solicitation charge, the intention of the parties is a required element. If one of the parties did not intend to follow through with a sexual act, that party did not commit a crime. For example, a man might approach someone he thinks may be a prostitute on a sidewalk just to find out if he is right about his hunch. Even if he engages in flirtatious or explicit conversation, it does not constitute solicitation for prostitution because he has no intention to agree to, or to commit a sexual act with the other person.

Defense counsel can argue that the defendant was not aware that his/her “date” was a prostitute, and that the whole situation was just a misunderstanding. This is frequently applicable with respect to escort services, and more sophisticated hobbyists and sex workers who refrain from explicit discussion of compensation for sexual services.

Although prostitution is a misdemeanor and the penalties for a first-time offense can be relatively mild – probation and a fine are typical – a conviction can have enormous negative consequences. Families have been torn apart, careers ruined, and reputations destroyed by a moment of weakness. Seeking the representation of a qualified criminal defense attorney is vital to ensure the best possible outcome of your case.